Dr. Flowers and “The Gays” 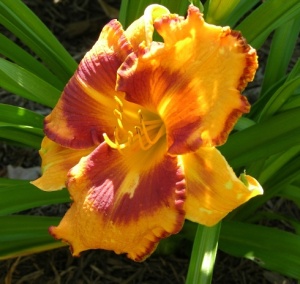 A retired doctor—an acquaintance of my mother’s—graciously offered to let my son use his grand piano while we were vacationing in Virginia. So, one Sunday, Mom and I brought Jesse over to the good doctor’s country estate, and, with a Haydn sonata cascading indoors, I was left in the back yard to chat with our host.

I grew up in the Shenandoah Valley and points south, so, though I didn’t really know the man, I knew the type: charming, sweet-as-pie exterior, conservative to the core. I thought mournfully of the New Yorker I had brought in the hopes that the house would be empty, and resigned myself to making the smallest of talk for a whole hour.

The doctor and his wife had a hobby business growing and selling flowers, as well as a carefully landscaped home garden. I do not know a lilac from a day lily. So as Dr. Flowers (as I’ll call him) showed me around, I struggled to think of questions. Do florists request certain flowers? How fast do the cut ones regrow? How long is the growing season down here?

Yes, I was that boring, and that bored.

We wandered from the greenhouse to a plot of flowers (no, I cannot be more specific) flashing a swirl of burnt orange and maroon: Virginia Tech’s college colors—or so I gathered. “I’m a big Hokie fan,” explained Dr. Flowers. I’m from Virginia; I should know what a damned Hokie is. But at this point I am just hanging on with context clues and nodding.

Then we came to a stop at another small patch of not-yet-bloomed blooms surrounding a statue of St. Fiacre (the name helpfully carved on the side). St. Fiacre was, as I had guessed (context clues!) the patron saint of gardeners. According to legend, a seventh-century bishop told him he could have as much land for his hermitage as he could surround with a furrow in a day; with God’s help, that turned out to be quite a bit.

In a gesture of approval, and in the hopes of keeping the conversation off gardening, I said off-handedly, “I love saints.” (It’s true; I do.)

“Now, I know you were raised Jewish,” the good doctor replied. “Are you still Jewish?”

This was a turn in the conversation I had not expected, and for which I was not prepared.

Whether someone is “still Jewish” is . . . not a question you ever hear in an area with a significant Jewish population. Anyone familiar with Jews is also familiar with the concept that being Jewish is less about belief than about belonging; it isn’t something you change easily. Or at all. You can be more or less observant; you can be “culturally” Jewish; I’m pretty sure you can even convert to Hinduism but still be Jewish.

So Dr. Flowers’ question revealed a certain provincialism. But it also revealed an open-mindedness, a willingness to entertain the idea that people change their beliefs. And it revealed curiosity. This wealthy, white-haired, round-bellied Republican was truly curious about me.

I didn’t know how to answer him. Partly because I didn’t know the answer—forget what I just said: am I still Jewish?—and partly because I was loath to offend. His sincere question deserved a sincere response, but the word “atheist,” as we know, can turn people off.

And then Dr. Flowers proceeded to tell me in his silky southern drawl that he, as a man of science, had a lot of trouble believing the Bible stories—the Easter story for instance gave him a lot of pause—and he told his pastor so.

He still loved his church, but he bemoaned the way the church in general often treated people, particularly “the gays” and women.

That phrase, “the gays,” clanged in my New York ears. Again, my brain struggled to assimilate words that were sort of wrong with a sentiment that was right.

It turns out that Dr. Flowers’ son is gay, and that revelation changed the doctor’s mind about a lot of things. “I was bad about it at first, for about a year,” he confessed. “I had a really hard time. And then my doctor said to me, did you love your son before you found out he was gay? And I said yes. And he said, is he the same person now as he was then? And, boom! That kind of opened my eyes.”

Well, that kind of opened my eyes.

For the rest of the time, we talked about subjects other than flowers.