Did you ever get a compliment that humbled you because you knew you didn’t deserve it?

I just did, in an email from someone who read my commentary in the Times Union on Greece v. Galloway. He said I was brave.

It was sweet of him to say, but I disagree.

It takes no courage to write about being an atheist and raising my kids as atheists. No courage for me: I’m self-employed; I live in the Northeast; I have a supportive husband, more-or-less like-minded friends and family, and no intention of running for public office.

You know what’s hard? Telling people in person. Childhood friends who don’t know the grownup me. Distant relatives I see once every few years. Jewish elders I admire. A mom I just met with an infectious laugh and a cross around her neck. My good friend’s devoutly Christian girlfriend.

In person, I am rarely as brave as I want to be–as I should be. I hedge and I dodge, even seemingly innocuous questions: “What are you working on?” or “Is Noah getting ready for his bar mitzvah?” or “Have your boys thought about joining the Boy Scouts?” Duck. Duck. Chicken.

Still live in the Northeast, still can’t be fired, still not planning a political campaign. What makes being honest in person harder than being honest in the paper? What am I afraid of? Here it is in all its pettiness: I’m afraid that they won’t like me or think I don’t like them. I’m afraid they will judge me or think I’m judging them. I’m afraid–horrors–of having an awkward conversation.

So I stay quiet. Not always, but more often than I am happy to admit. More often than a brave person would. And so what? Does my silence really matter? Do people really need to know that I don’t believe in God? Isn’t it conceited to think that my religious beliefs are of interest to anyone beyond my family? How important do I think I am?

Not very, I promise you. But my insignificance is precisely why I should speak up—I,  the nice, chatty mom who brought the killer cupcakes. If “atheist” is ever going to stop being a scary word, atheists have to be willing to say in casual conversation that . . . we’re atheists. All of us do. Not just the intellectual gadflies among us, the full-time activists, the celebrity comedians.

Fear of being disliked is no excuse.

Fear of being fired, ostracized, physically attacked, or financially ruined . . . those are excuses. Are you an atheist running for school board on the buckle of the Bible Belt? Then feel free to keep it quiet, and God bless (wink, wink). Just do your best to keep your sanity and those of us with less to lose will try to ease your way.

Did you ever get a compliment that inspired you to deserve it?

Standing Up to “The Pledge”

We were asked to stand for the Pledge of Allegiance. I stood. I looked across the middle school “cafetorium” to the singing group assembled for the award ceremony, curious what Jesse would do.

At dinner just a week before, we had talked about the mixing of religion and government. I told the kids that the Supreme Court had ruled, in Greece v. Galloway, that it was constitutionally permissible to open town meetings with blatantly sectarian Christian prayer.

Don’t get the wrong idea. The Supreme Court doesn’t usually come up at our kitchen table. Usually we talk about why children should eat their food without complaining, and, yes, Jesse, making a face is complaining. Or how, indeed, Noah, there is a difference between erupting into odd barking sounds and bursting into song—although, no, Jesse, that doesn’t mean it’s OK to sing at the table. After all, we might actually want to have a discussion sometime.

This was one of those rare discussion times. Jesse expressed amazement at the Greece v. Galloway decision and at the fact that “in God we trust” is on our money and that “under God” is in the Pledge of Allegiance. “We should totally get them to take ‘under God’ out of the Pledge,” he said, with a righteous gleam in his eye.

Noah replied, “Yeah, if you want to be a stereotypical atheist.”

Noah is 13; perhaps you deduced that from the eye-roll embedded in his comment. Perhaps you didn’t, since Justice Kennedy took pretty much the same tone in Greece v. Galloway, only without the excuse of adolescence. Generally speaking, Noah follows the fashion and keeps his cool; Jesse, age 11, follows his passion and loses his temper. They’d make a good buddy cop team if they didn’t spend so much time arguing about who gets to sit in the front.

Anyhow, the conversation stopped cold at that point, less because of the chilling effect of the teenager’s dismissive tone, and more because after-dinner TV had been ruled constitutionally permissible. Off they went.

I think it was the very next day that Massachusetts’ highest court decided that “under God” was just fine, thank you very much, since reciting the Pledge was voluntary.

Legally, the Pledge is, indeed, voluntary. No child can be compelled to say it, or punished if he doesn’t. But if your teacher asks you to stand and say the Pledge, and all the kids around you are standing and saying the Pledge, how voluntary can it be?

Still, when you are an atheist, you do have to decide whether and when you want to go all “stereotypical.” What prayers do you protest? What reflexive “God bless you”s or “Merry Christmas”es or “She’s in a better place now”s do you correct? When do you sue and when do you shrug?

Of course “under God” shouldn’t be in the Pledge, but I myself have never been moved to fight it, because, with or without God, the Pledge gives me the creeps. A loyalty oath? I was barely able to swear “allegiance” to my husband, and even then I reserved the right to disagree with him in public.

In the cafetorium, I stood, but didn’t say the Pledge, curious but not really concerned whether the woman next to me noticed. I watched as across the room my little boy put his hand on his heart, and said all the words he was expected (but not legally required) to say, with “under God,” obedience, and conformity for all.

Choosing to go along with the crowd is a useful skill, a sign of maturity, like lying (which he was also doing). And for him it may have been a wise calculation: he already stuck out enough, in middle-school terms, standing there in the Select Choir’s signature silky, crimson blouse (a garment that would have slain Noah as surely as the Shirt of Nessus slew Hercules). Jesse had simply learned to pick his battles. But that made me a little sad.

And it made me wonder how many other people in the room did not want to be murmuring along with the Pledge. Nonbelievers, free-thinkers, churchgoers who think church should be kept separate from state, foreign-born parents of the kids being honored. All of us facing the flag, making our personal calculations.

Who has endless energy to swim against the tide? Who, on an average school night, has the strength to stay seated when asked to stand? 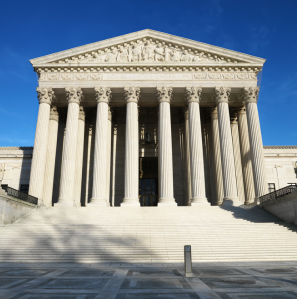 In expressing the majority’s decision that the town of Greece, N.Y., is constitutionally permitted to begin its meetings with prayer, Justice Kennedy said something I agree with. Not the opinion as a whole, just one thing:

“Even seemingly general references to God or the Father might alienate nonbelievers or polytheists,” he writes.

He’s right. Years ago, growing up Jewish in a small town in Virginia, I would have cared more about blatantly Christian rhetoric. I heard a lot of public prayer back then, and I used to hold my breath against the inevitable “in Christ’s name we pray” that preceded the “Amen.” That’s what the women who originally brought suit against the Town of Greece were after: not to eliminate the opening prayer, but to make it generic and therefore inclusive.

Now, as an atheist, I realize that no religious prayer, no matter how “generic,” is inclusive. I can tell because it doesn’t include me. Or my husband. Or my kids.

Justice Kennedy argued that since we can’t come up with totally inclusive prayer, we’re going to have to . . . permit the obviously exclusive kind. Seriously, that’s the way his logic worked.

Here’s a fun game: read his opinion yourself while trying to keep the innocent question, “Why not no prayer?” from popping into your head. Kennedy doesn’t answer that question; he just goes on about the fact that prayer serves to “unite lawmakers in their common effort” even though he just argued that no prayer is common to all and that people who don’t like the prayer can always leave the room. While feeling super united, I guess.

“Why not no prayer?”

I know, I know, it wasn’t the case at hand. The suit was far more modest than that; it accepts the basic premise that prayer before a town meeting is worthwhile—or at least appropriate. And to be honest, I understand why people want to pray at the beginning of public events. I understand wanting to express a sense of communal purpose, and to consecrate the place and time. Words have the power to do that.

But do they have to be religious words?

Let’s say 14 citizens thought it worthwhile to leave the comfort of their couches to sit on folding chairs in a chilly town hall. Fourteen citizens took the time to speak or vote or bear witness under fluorescent lights. There must be ceremonial language that does justice to all of them—no matter what their beliefs about God. There must be language that can solemnize the decision each made to participate in the public sphere.

It could start simply, so no one gets too embarrassed. Maybe the Town Clerk or the Chair of the Zoning Board would stand.

Good evening, and welcome to the [date] meeting of [name of governing body]. We gather as citizens and stewards of [name of municipality] to work together on behalf of this [town, city, etc],  . . .

Enter a bit of ceremony:

to honor its past, improve its present, and prepare for its future.

May a spirit of cooperation guide our discourse tonight, and may our efforts be ennobled by wisdom and courage.