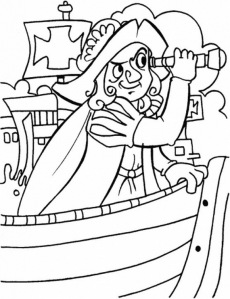 This is how, years ago, I demonstrated to my children the concept that Columbus Discovered America: I stood up, turned away from where they sat eating dinner, turned back, and—with an arm raised in triumph—declared, “I have discovered this table!” And then I sat on my daughter.

Sometimes I think I would be good at homeschooling.

I’d be good at the subtext part, anyway: teasing out the flaw in the idea that a place isn’t “discovered” until Europeans discover it.

The text part, well . . . I’d have to look that up. What I vaguely remember from my childhood was that, after an arduous journey, Columbus, the first European to cross the Atlantic, landed in North America, shocking the folks back home by not falling off the edge of the world they had presumed flat.

Half a minute of internet research reveals that, almost 500 years after Leif Eriksson had first crossed the Atlantic, Columbus made it not to North America but to the Caribbean Islands (which he thought was Asia), and everyone back home had known since Aristotle that the earth was round.

Ten more minutes of internet research put me off my breakfast. Columbus presided over and/or perpetrated the worst stuff you can imagine people doing to other people. Selling native girls (I mean girls—9 or 10) into sexual slavery. Cutting off the hands of natives who failed to produce their quota of gold dust. Burning people alive for trying to escape, or sic’ing dogs on them, or cutting off ears, noses, legs. And I’m sparing you the gory details.

On the one hand, Columbus Day is but another example of a tradition that persists although it obviously conflicts with pretty much everyone’s moral system—including that of the people who promote it. How many elementary school teachers could even bear to read about the behavior of the man whose Xeroxed picture they annually ask their students to color in?

On the other hand, there’s hope. Public opinion does change; we do learn. Hawaii, South Dakota, Alaska, and Oregon do not celebrate the holiday. Berkeley, California, replaced Columbus Day with Indigenous People’s Day, and so did Santa Cruz, Minneapolis, and Seattle. New York State’s kindergarten curriculum now suggests that teachers at least “Explain that native people were already living on the continent where Columbus’s ships landed.” The high school curriculum recommends teaching Columbus’ voyage as a “turning point.” I guess you could argue that’s like calling the Holocaust a “turning point,” but still, it’s better than teaching the voyage as a triumph and the explorer as a hero.

An element of hero worship persists, however. New York City’s official celebration begins with a solemn wreath-laying at the statue of Columbus in Columbus Circle. And then there’s the parade—“the world’s largest celebration of Italian American culture,” according to the event organizers. This year, its 70th, the parade will feature 35,000 marchers and attract over a million spectators.

How much irrefutable historical evidence will it take to undo that?

I say, keep the parade. Keep celebrating Italian Americans. Just turn the whole thing around, and head south down Fifth Avenue to 23rd Street. There, at the entrance to Eataly, lay a giant wreath of bay leaves at the orange-Croc’d feet of a far superior exemplar of America’s Italian heritage: Mario Batali.