Grace for an Atheist Table 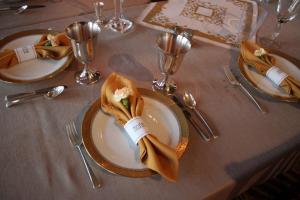 As an atheist, I have always loved Thanksgiving. It’s the perfect holiday: national but not nationalistic, it celebrates consumption but not consumerism. And it provides all the benefits of a religious holiday (food! family! fellowship!) without reference to a Supreme Being.

Or so I thought. Until, curious, I looked up the facts — a terrible mistake if you want to leave your beliefs undisturbed. The origin of Thanksgiving is seriously, sincerely religious, more so than Christmas. Apparently New England colonists used to declare days of prayer in which to give thanks to God, and George Washington’s Thanksgiving proclamation—October 3, 1789—does just that. It recommends “a day of public thanksgiving and prayer to be… devoted by the People of these States to the service of that great and glorious Being, who is the beneficent Author of all the good that was, that is, or that will be.”

OK, got it. No wiggle room there.

Where’s the food? The feast? The harvest? One word—“plenty”—will have to suffice.

Seventy-four years later, Abraham Lincoln’s Thanksgiving proclamation began like this: “The year that is drawing towards its close, has been filled with the blessings of fruitful fields and healthful skies.” Ah, that’s more like it. But — wait — that’s shocking! The year that was drawing to a close was 1863, the bloodiest year of the Civil War. Those fruitful fields were the scene of gruesome, relentless slaughter: more than 100,000 men lost their lives in Gettysburg, Chancellorsville, and Chickamauga alone. This would be like writing, mid-September 2001, “It’s been another beautiful week in New York City.”

But that’s the point of this call for gratitude: even in the midst of our great national horror, there is good, so much good. Lincoln’s proclamation—probably written by his Secretary of State, William Seward—is longer than Washington’s and refers to God less often, but does so far more pointedly: “No human counsel hath devised nor hath any mortal hand worked out these great things. They are the gracious gifts of the Most High God . . .”

And it goes on:

To these bounties, which are so constantly enjoyed that we are prone to forget the source from which they come, others have been added, which are of so extraordinary a nature, that they cannot fail to penetrate and soften even the heart which is habitually insensible to the ever watchful providence of Almighty God.

That’s my heart he’s talking about. And my children’s hearts. (And possibly Lincoln’s; he was not known to be devout.) Of course, as an atheist, I don’t ever ascribe these gracious gifts to God; I never believed a supernatural being to be the source of the bounties that I enjoy.

And yet, like any other lucky soul, I am still “prone to forget” my many blessings and am “habitually insensible” to my own good fortune. I can use a day set aside now and then to make myself remember.

I could—with apologies to the Puritans—keep Thanksgiving but leave God and prayer out of it. Just because it began as a day of prayer doesn’t mean mine has to be. Atheists don’t have to thank God: they can thank their hosts (or welcome their guests), toast the cooks, and enjoy the food.

Maybe that would be enough for me if I didn’t have kids. But even though I don’t want my children to believe in God, I still want them to believe in blessings. Beauty. Wonder. Good fortune. Grace.

And have the words to talk about them.

So I have written a prayer, a few communal words that try to express not just passing emotion but universal truth. As an atheist who craves the comforts of religion, I do a lot of DIY: making new meaning of old holidays, making up my own holidays, trying (and trying again) to establish family rituals. Sometimes, to be honest, I get discouraged. Religious feeling depends so much on community: on the fact that the whole village recognizes the significance of a bar mitzvah, that everyone beside you in church knows the tune of the hymn. How can I possibly achieve that on my own?

Still, I think of the extraordinary bounties that my children and I enjoy, and I have to try.

If you like this prayer, please consider saying it before your Thanksgiving meal. Wherever you are, you’ll be saying it with us.

For the sun and earth, farmer and cook,

For family and friends.

We pause to remember those who cannot be with us today

And those who live more in famine than in feast.

May our sense of good fortune overshadow our daily troubles

And yet cast light on the struggles of our neighbors.

For life’s great bounty and the will to share it

And in gratitude, we eat.

I am grateful to The Friendly Atheist, where this post first appeared.

10 thoughts on “Grace for an Atheist Table”