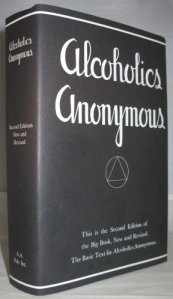 We parked next to a lone car in the lot, and, once inside, wound our way through the seemingly empty church to find the door to the basement. I hung close to my friend, my guide to the world of Alcoholics Anonymous. I wanted to know what AA was like, what his new life was like, so I had asked if I could go with him to a meeting.

I regretted the outing as soon as we found the room. I had pictured rows of folding chairs, half filled with reluctant people clutching coffee cups and coats. I had pictured myself in the back row, at a friendly, supportive remove. But we were the fourth and fifth people there, and we draped our coats around chairs set in an intimate circle. I smiled nervously at the other three people, wondering what I would say when it was my time to address them. “Hi, I’m Kate, and I’m ———–”? Oh, good: two more arrived; now we were seven. Nine. Ten. At the last minute, the circle filled, and there were twelve of us.

AA, as you probably know, uses a twelve-step program of recovery. The first thing we did, after the opening welcome, was to read these steps out loud, one by one, from a photocopied sheet in a plastic sleeve, passing them from person to person. When my friend handed them to me, I handed them right along to the fellow on my right. As a visitor, I didn’t feel like it was my place to say them. As an atheist, I didn’t think I could.

I had known before I came that AA asks its members to give over control of their lives to a Higher Power, and I figured there’d be a God-related step or two. But I was wrong: six of the twelve steps center on or at least refer to God. He doesn’t get that much ink in the Ten Commandments.

Then it became less about God and more like church. We passed out copies of the Big Book (Alcoholics Anonymous, the AA “bible”), fat hardbacks with black covers, fetched from a little cabinet under the coffee maker. After some discussion about where the group had left off, we settled in to read “Stars Don’t Fall,” a testimonial by Felicia G., who drank her way through the 1940s before eventually grasping sobriety.

As we read her story aloud, turn by turn, paragraph by paragraph, we were, implicitly at least, tasked with finding commonality between her story and ours. It wasn’t easy. Felicia wasn’t just from a different era (in which one went to “gin mills” to get “tight”); she was from a different life entirely. She was born in a castle, had a chalet in Switzerland, and kept a house in Virginia “during fox hunting season.” She knew how to hold a terrapin fork. I wasn’t sure what a terrapin was.

But when she describes her preoccupation with drink, even I, a “normal,” possessed of what AA refers to as the “power of choice in drink,” could relate:

Other girls whom I had known all my life asked for one weak scotch after dinner. Sometimes they’d put it on the mantel, and forget it. My eye would be glued to that glass. How could anybody forget a drink?

Felicia tries to stop drinking on her own—“I must use self-will, self-control. I must go on the wagon for a while”—and fails. She cannot do it alone. Eventually her analyst sends her to Bill (AA’s founder), who sends her to Marty, who takes her to a meeting, and soon she meets Priscilla, who asks her to help Anne, who is in real trouble. One night with Anne, in need of help, Felicia calls the AA central office, which dispatches John and Bud to meet them. “They did not seem ashamed to be with us, these strangers. They were taking the trouble to try and help. Why? I was astonished and deeply moved.”

“I think now,” writes Felicia, “that a God, in whom I did not believe, was looking after me.”

Ah, God. And yet she describes very clearly who was looking after her: Bill and Marty and Priscilla and John and Bud and so on. Looking around the room at these people patiently listening to each other, serving each other coffee and cookies, passing information from hand to hand, and ultimately—in the few minutes left after the reading was over—sharing their stories with each other, it struck me once again that the “Higher Power” is really just human power in disguise. It makes sense: the idea that Something is in control takes the sting out of the realization and admission that you are not. But focus on a Higher Power is really a benign and brilliant feat of misdirection: Look—over there—that will save you, that will hold you steady—and, while you’re looking, here, take my hand . . .

My point is not that Bill didn’t believe or that these people don’t, in one way or another. Even my friend, an atheist like me, was trying to figure out whether he could at least make the switch to agnostic. My point is that Higher Power, whatever it may be, is not the source of their salvation.

It’s crucial to note that Felicia was saved not just by the people helping her, but also by her helping them. Serving others gave her a sense of purpose and worth, not to mention a distraction from self-pity. “I completely forgot about myself,” she writes, “in trying vainly to help Anne, whose misery I understood.”

My friend had been sober about a hundred days; his phone was filled with new numbers: other AA members he called to check up on, and those who called to check on him. His calendar was filled, too, with meetings and assignments from his sponsor. AA puts you right to work: someone has to make the coffee, run the meetings, give literature to new members, “qualify”(or speak at length about one’s experience), and eventually sponsor others. “Do you think that you are one of us?” Bill asks Felicia when they first meet. Saying “yes” included her instantly in a network of people who help one another.

I would venture that vibrant places of worship operate somewhat on the same principle. Although the worship service may talk about God, what really uplifts the soul is . . . service itself. Doing for one another. Seeing the suffering human inside the mom in the cereal aisle or the socialite with the chauffeur and “taking the trouble to try and help.”

That’s it, I thought: that is what is saving my friend.

As we read, the man to the left of my friend seemed repeatedly confused and unable to find his place in the text. Fearing he was drunk, I tried not to stare. No, that’s not right: I tried not to look. But my friend leaned over to help and discovered the man had a different edition of the Big Book than the rest of us had. So my friend gave him his book and then the two of us shared mine: I put my hand on his shoulder so I could lean in to follow the reading. And I found that, weirdly, once my hand rested on my friend’s shoulder, I could not remove it. Not for the rest of the meeting. Maybe I was offering him comfort and strength, or maybe it was the other way around.

6 thoughts on “The Meeting”