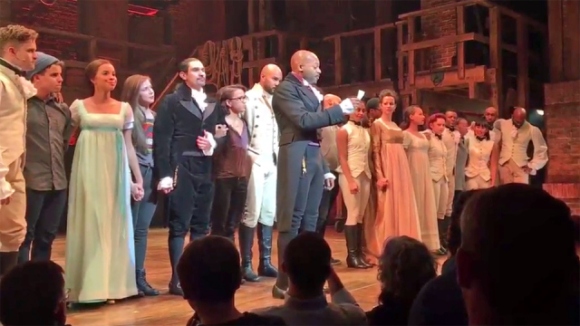 The morning after the election I made my husband get up with the kids. I couldn’t face them. They were not innocents: they knew about North Carolina’s bathroom law and the dangers of driving while black. But they are children of the Obama era: they’ve grown up believing that the forces of progress win.

As their mom, I had let them believe that, had even encouraged them to. A parent is supposed to do two basic things: protect her kids from harm and prepare them for the future. I had failed on both counts. On top of the shock and sorrow I felt shame.

Days passed. I couldn’t read the paper. I couldn’t look at Facebook. I couldn’t even go into my closet, lest I see the suit jacket I had bought for Election Day. (Then it was a lovely shade of blue; now it was the color of confidence kicked in the gut.)

Sure enough: the kerfuffle about the Hamilton cast’s post-show statement to audience member and future VP Mike Pence. Trump’s expression of outrage and demand for an apology. And finally his supporters’ call to #boycotthamilton.

I laughed out loud for the first time in 10 days. Boycott Hamilton? That’s like attacking a mountain with a Wiffle Ball bat. Taking aim at the sun with a squirt gun. With that one hashtag, the forces of regress revealed themselves to be puny, to be losers who would, eventually, lose. It will be awful in the meantime: we’ll be fighting for health care and reproductive rights; we’ll be hiding undocumented immigrants while praying for China not to take seriously our thin-skinned tweeter-in-chief.

But in the long run, he doesn’t stand a chance against Hamilton—against art that speaks to people. That’s where progress will not just live but thrive. Art that both six-graders and Broadway snobs are obsessed with; art that cites Shakespeare and the Notorious B.I.G; art that springs from all kinds of crazy knowledge about music and musicals and history and politics and rhyme; art that’s based on a fucking 832-page book.

And if Hamilton-the-work-of-art triumphs over Trump, so too does Hamilton’s vision—your vision—of an America where immigrants are necessary, where talent and brains can make things happen, where culture is treasured but skin color is irrelevant. My 11-year-old, who knows your show by heart but has not seen it, confessed recently that when she saw a portrait of the actual Alexander Hamilton, she was a little disappointed. “I mean, I knew he wouldn’t look like Lin-Manuel Miranda, but I was kinda hoping he would.”

Our kids are children of the Hamilton era. We’re going to be OK.