Take the Statues; Leave the Pedestals 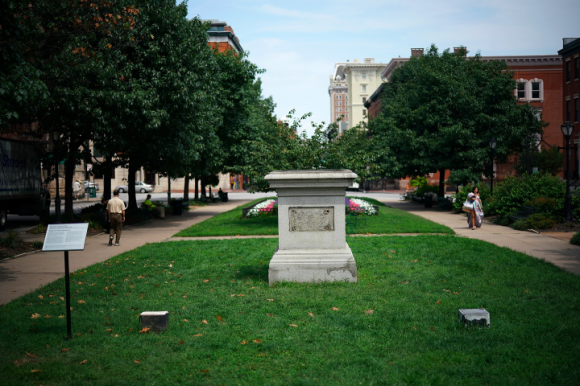 “It’s Wrong to Erase History” is the title of an angry letter to the editor of the Baltimore Sun complaining about the swift and stealthy removal of four Confederate statues Tuesday night.

That’s the gist of much of the argument for leaving intact commemorative statues of Confederate leaders.

But statues aren’t history. They are present. They are now.

Just think about their function: what does a commemorative statue do? It makes a statement about our communal values. It expresses our ideals. Just by standing there in a park or near a courthouse or government plaza, it is doing its job. Not in the past — right now, today. And tomorrow. And every day that it continues to stand.

We should not erase signs of our historical past, even when — especially when — that past is ugly. We shouldn’t pave Gettysburg and put up a parking lot. But Gettysburg does not continue to produce the horror for which we remember it. Gettysburg is no longer the site of bloody battle; it’s a historical site complete with Visitor Center, Museum, Ranger-Led Tours, and a Cyclorama.

Of course, even though these statues aren’t history per se — even though they are all currently at work valorizing leaders of the Confederacy — they are the site of a historical event: the erecting of the statue itself.

That history, as Zack Beauchamp at VOX has pointed out, is often repugnant: a doubling down on the myth of white southern nobility in response to the fight for civil rights.

That’s why many of these statues went up. And the history of municipal approbation of white supremacy is history we should not erase.

I can think of two good options for accurately representing the historical record:

(1) Erect another statue next to the first statue as commentary. I’m thinking maybe Martin Luther King, Jr., head in hands, sobbing. Or a black mother looking askance at Lee while covering her child’s eyes. Or a mob of Klansmen in full costume giving Lee a thumbs up.

That might get pricey. A cheaper option would be

(2) Remove the statue, but leave the pedestal, complete with a new commemorative plaque. For example:

Here stood, from 1924, a statue of Confederate General Robert E. Lee on horseback.

For almost a century this 26-foot-tall bronze likeness expressed civic admiration for a man who fought against the United States and for the cause of slavery.

In 2017, the people of Charlottesville, Virginia, decided it was time to take it down.

3 thoughts on “Take the Statues; Leave the Pedestals”