I’ve never shared Thanksgiving dinner with Betsy Cole, but I like to think we commune every year on that day. She’s always busy cooking for her extended family down in Richmond and I’m always (until this year) busy cooking for my extended family in the Shenandoah Valley. But through the transitive power of a shared recipe, we’re basically in the room together: me timidly acknowledging the changes I have made to her recipe, her smiling with the forbearance that (I sure hope) comes with age. More likely, she’s simply shrugging: she doesn’t take this recipe nearly as seriously as we do.

In fact, it’s possible Betsy doesn’t even bake Betsy Cole’s Never-Fail Bread Rolls anymore. I’ve heard that rumor but I refuse to look into it. There’s something about Thanksgiving in particular that makes me averse to change, and I’ve had enough change this year; I don’t care to contemplate the idea that Betsy’s gotten into sourdough or off gluten. I need her to be the same Virginia State Fair blue-ribbon-winning, speed-knitting, bridge-playing, choir-singing grandmother that I’ve always known her to be, as well as the source of everyone’s favorite roll recipe.

Betsy would tell you there’s nothing special about these. She’s right: they are an ode to the ordinary, composed of the absolute simplest ingredients, plying the basic pleasures of salt, sugar, and fat. Piled into a basket, they express abundance, in reassuring individual portions. You get your own little loaf of bread all to yourself and I think that makes everybody relax just a little bit more. Especially if you make dozens.

Stir the yeast into 1 cup warm water. While it dissolves, melt 1/2 cup butter and 1/2 cup shortening in the microwave, and pour them into the bowl of a stand mixer.

Add 6 cups of white flour. Knead with the dough hook for 5 minutes. If it’s not forming a ball and cleaning off the sides of the bowl, add a little more flour–up to 1/2 cup. Knead 3 more minutes. Remove the dough from the bowl and dump onto a lightly floured counter and knead by hand for a minute before forming into a ball and returning to the bowl.

Cover and let rise on the counter till double. Then refrigerate for at least 6 hours and up to 24.

Now comes the fun part: form into rolls. I weigh mine out to about 50 grams per roll, push my thumb in the center and purse the edges into the center and pinch, creating a taut ball. Place on a greased pan seam-side down. They fill a half sheet pan: seven down and five across for a total of 35.

Let rise at least 2 hours–until puffed and touching each other. Bake at 375 for about 20 minutes. They should be golden brown, and the interior temperature of the dough should be at least 190–but it’s forgiving if you overbake them a little, on account of all the fat. 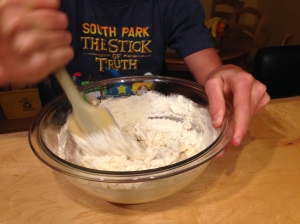